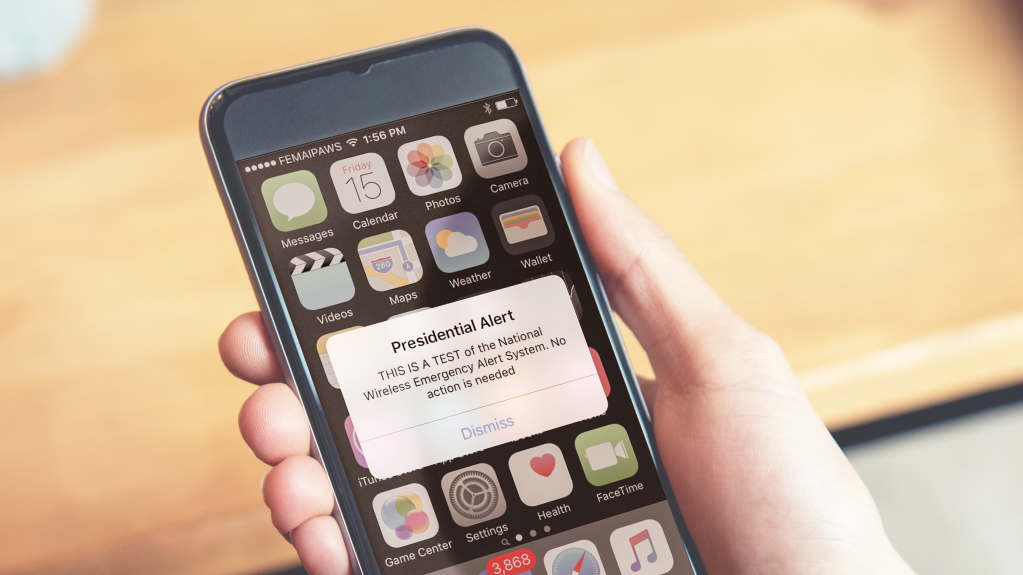 People with cellphones will receive a message like this one on Wednesday. FEMA hide caption

People with cellphones will receive a message like this one on Wednesday.

Wednesday afternoon, at exactly 2:18 p.m. ET, you can expect to get a text headlined “Presidential Alert” on your cellphone.

But it’s not exactly from President Trump. Rather, its a test of a new nationwide warning system that a president could use in case of an armed attack by another country, a cyberattack or a widespread natural disaster.

During the Cold War, it was pretty common to see and hear tests of the Emergency Broadcasting System.

Things are a little more sophisticated now, but basically the same minute-long, Emergency Alert System test is conducted every month or so on broadcast, cable, and satellite TV and radio. There’ll be one of those Wednesday afternoon too.

But now there will also be an alert on your cellphone.

Many cellphone users receive alerts now — Amber Alerts for missing children, and flash flood or tornado warnings. But Wednesday is the first time for a national, presidential alert issued by FEMA.

There will be an audible tone and then a text that states: “Presidential Alert” followed by “THIS IS A TEST of the National Wireless Emergency Alert System. No action is needed.”

FEMA estimates some 225 million devices, or about 75 percent of cellphone users in the U.S., will receive the alert. It will be provided by all the major carriers. And sorry, but you can’t opt out.

Irwin Redlener, director of the National Center for Disaster Preparedness at Columbia University, says testing the system “is a good idea,” and there are a variety of scenarios where it would be good for the president to speak directly to the public.

But Redlener has some qualms, especially, he says, when it comes to this president — like worrying it could be used for political purposes “or to create a diversion, if he felt the presidency was under threat.” Redlener says “these are not powers many Americans would want to give to Donald Trump.”

Redlener is not alone. Last week, three people filed suit in New York to block the testing of the system, known as Wireless Emergency Alerts or WEA. The suit states the plaintiffs are Americans “who do not wish to receive text messages of any kind on any topic or subject from President Trump.” They say the government is violating their privacy and the sanctity of their homes and that it wants to turn people’s cellphones into “government loudspeakers that compel listening.”

FEMA says that allegation is baseless. In a background briefing for reporters, a senior FEMA official conceded there is no opting out of the alert but said the system is very well-governed. “You would not have a situation where the president would just wake up one morning,” as the official put it, “and attempt to send a personal message.”

This Is Only A Test: Why Your Cellphone Will Buzz Wednesday Afternoon