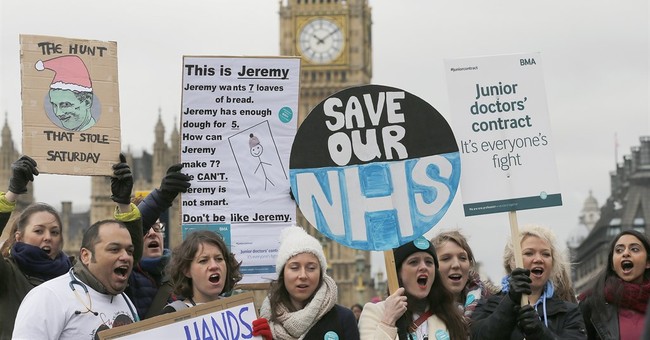 Some frightening news out of the United Kingdom: someone has hacked the computers of the National Health Service and is demanding ransom. Various hospitals throughout the U.K. have lost phone services and computers, and some procedures have been canceled due to the computer failure. People are being advised to avoid going to emergency rooms for the time being.

The hackers are demanding payment in Bitcoin, which is slowing down the ransom process.

NHS hospitals across the North, East and West Midlands, and London are reporting IT failures, in some cases meaning there is no way of operating phones or computers.

At Lister Hospital in Stevenage, the telephone and computer system has been fully disabled in an attempt to fend off the attack.

Patients have been told not to come to A&E and all non-urgent appointments and operations have been cancelled.

East and North Hertfordshire NHS trust said in a statement: “Today the trust has experienced a major IT problem, believed to be caused by a cyber attack.

This is a huge wake-up call for hospital systems throughout the world, beyond the United Kingdom. Cyber security is crucial, and it is paramount that these systems are kept safe from hackers and other malware. It’s terrifying to think about, but hopefully this attack forces the NHS to up their game and to keep patients safe.

It is unknown who is behind the attack.